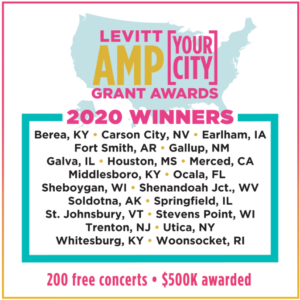 In July, the Levitt Foundation invited nonprofits to submit proposals that would reflect the three goals of the Levitt AMP awards: Amplify community pride and the city’s unique character; enrich lives through the power of free, live Music; and illustrate the importance of vibrant public Places. Nonprofits that received a previous Levitt AMP grant were eligible to reapply. In an effort to inspire and engage communities across the country around the power of creative placemaking, the Levitt Foundation opened the selection process to the public to choose the top 25 finalists.

The public voted on the submitted proposals over a three-week period in November, selecting their favorite projects online at http://levittamp.org.

“We are thrilled to announce the 2020 Levitt AMP Grant Awards winners, and express our appreciation to everyone who voted online to choose the finalists,” says Sharon Yazowski, Executive Director of the Levitt Foundation. “As a returning Levitt AMP community, we’re excited to see how Downtown Springfield Heritage Foundation will continue to breathe new energy into the Y Block through the Levitt AMP Springfield Music Series, while bringing residents together to envision the future of this historically significant space.”

The 2020 Levitt AMP winners include 5 new and 15 returning grantees from a broad range of communities: rural towns with populations of less than 5,000 like Shenandoah Junction, West Virginia.; Houston, Mississippi; and Soldotna, Alaska; mid-sized cities like Carson City, Nevada; Stevens Point, Wisconsin; and Woonsocket, Rhode Island; and larger cities with populations of 80,000 to 115,000 like Merced, California; Fort Smith, Arkansas; and Springfield, Illinois. Each winner will present 10 free concerts featuring a diverse lineup of high-caliber entertainment as part of the Levitt AMP Music Series, for a total of 200 free Levitt AMP concerts across the U.S. in 2020.

The Berea Arts Council will present the fourth Levitt AMP Berea Music Series, celebrating the city’s social justice heritage and energizing its historic Old Town Artisan Village with an eclectic array of musical experiences from across the globe. The 2020 series will continue to fuel Old Town’s economic recovery and transformation into a welcoming hub for art, food and community gatherings.

The Brewery Arts Center will present the fifth Levitt AMP Carson City Music Series in the heart of the community’s Historic District, a once-neglected street corridor that has been transformed into a thriving cultural destination through the free concerts. The upcoming Levitt AMP series will deepen activation of the space, further solidifying the Brewery Arts Center’s role in fostering community cohesion and pride during Levitt AMP concerts and beyond.

The Levitt AMP Earlham Music Series, presented by Earlham Chicks with Checks, will return for a second year, furthering Earlham City Park’s transformation into a vibrant, music-filled gathering place. The 2020 series will offer a diverse array of high-caliber performances and foster inclusivity and connectedness both in Earlham and across surrounding communities.

64.6 Downtown will present the first Levitt AMP Fort Smith Music Series at the Riverfront Amphitheater on the shores of the Arkansas River, creating a place for people of all ages and backgrounds to come together and advance the community-driven effort to create a thriving and diverse economy. The series will use free, live music as a vehicle to strengthen the social and economic fabric of this former manufacturing hub.

The first Levitt AMP Gallup Music Series presented by the Gallup Main Street Arts & Cultural District will breathe new life into the underused Courthouse Square in the heart of Gallup’s Historic Downtown. The upcoming series will celebrate Gallup’s rich cultural diversity, bringing together all those who call Gallup ‘home’ to build a positive and inclusive community identity, while fostering civic pride.

The Galva Arts Council will present the third Levitt AMP Galva Music Series in Wiley Park, further transforming the green space into a dynamic hub for connectedness and self-expression through free, live music from across the globe and helping the community envision the park’s forthcoming permanent stage. The 2020 series will invite concertgoers of all ages and backgrounds to take part in growing and sustaining Galva’s creative economy.

The first Levitt AMP Houston Music Series presented by Potter’s House will create an inclusive, music-filled gathering space within the scenic 10-acre Legion Park. Situated just blocks away from the city’s once bustling downtown, the upcoming series will highlight the potential of the underused local green space, while bringing momentum to local efforts to energize the city’s economy through strategic cultural initiatives.

The first Levitt AMP Merced Music Series presented by the University of California Merced will infuse creative energy into the underused Merced Open Air Theatre in Applegate Park. Situated in the heart of California’s Central Valley, the upcoming series aims to build a stronger and more unified community by providing a place where concertgoers of all walks of life can discover and celebrate their shared humanity and cultural vibrancy.

The Levitt AMP Shenandoah Junction Music Series presented by Jefferson County Parks and Recreation at “The Amp” marks the next chapter in the decades-long journey to create a vibrant, music-filled community gathering place in the 130-acre Sam Michaels Park. The Levitt AMP Music Series will elevate and expand the amphitheater’s existing concert series, bringing together people from throughout the area to enjoy world-class music while building community.

Vision Soldotna will present the second Levitt AMP Soldotna Music Series in Soldotna Creek Park, a former maintenance yard on the banks of the Kenai River that has been transformed into a vibrant green space where music fills the air. The 2020 series will focus on strengthening relationships between Soldotna’s diverse cultural communities and fostering further diversity and inclusivity.

Assistance Project Zone. With new accessibility features in place, the 2020 series is poised to bring together people of all walks of life from “St. Jay” and beyond, and will continue to enliven this former industrial area through diverse arts programming,

CREATE Portage County will present the fourth Levitt AMP Stevens Point Music Series in Pfiffner Park, a lush green space that runs along the Wisconsin River. The 2020 series aims to foster a local creative economy and further illustrate the power of creative placemaking, empowering residents of all ages and backgrounds to come together and shape the future direction of the downtown and riverfront while enjoying free, live music.

The Cowan Community Center will present the third Levitt AMP Whitesburg Music Series on the Mountain Heritage Festival Stage, further revitalizing the community’s downtown core through diverse, high-quality arts experiences. The 2020 series will continue to transform the site of a former railroad yard and shuttered high school into a place where people of all ages and backgrounds can envision, celebrate, and build in a stronger and healthier community.

NeighborWorks Blackstone River Valley will bring the third Levitt AMP Woonsocket Music Series to life in River Island Art Park, continuing to reinvigorate the scenic, once bustling public gathering place in the heart of the city through engaging, family-friendly concerts. The 2020 series will continue to serve as a cultural, community and economic catalyst for the city—bringing residents and local businesses together to celebrate and strengthen downtown Woonsocket.

Last year, the Levitt Foundation awarded multi-year funding to three returning grantees who had made a tremendous impact in their communities every year since the launch of the Levitt AMP Grant Awards program in 2015. Main Street Middlesboro, John Michael Kohler Arts Center and Trenton Downtown Association were each awarded multi-year funding to present the Levitt AMP Music Series in their cities in 2019, 2020 and 2021.

Through the Levitt AMP Middlesboro Music Series, Main Street Middlesboro has transformed a vacant gravel lot into a vibrant gathering space complete with a volunteer-installed lawn and donated permanent stage. The 2020 series will build upon this momentum, augmenting the community-driven revitalization of its downtown and positioning the series for a wider impact through robust partnerships with local and regional nonprofits.

Trenton Downtown Association has made remarkable strides in strengthening the social and economic fabric of the state capital’s historic downtown core through the Levitt AMP Trenton Music Series, bringing together a richly diverse community through the power of free live music, while creating a thriving cultural destination in the centrally located Mill Hill Park.

The Levitt AMP Sheboygan Music Series has sparked significant investment in the area while bringing people together downtown. The John Michael Kohler Arts Center will present the 2020 series in the city’s vibrant City Green—once the site of a vacant large retail store, now an energized green space complete with a permanent stage in the heart of the city’s newly created Arts, Culture and Food District—celebrating this multi-year placemaking milestone.

About the Mortimer & Mimi Levitt Foundation

The Mortimer & Mimi Levitt Foundation is a private foundation that exists to strengthen the social fabric of America. Through its support of creative placemaking, the Levitt Foundation empowers communities to transform underused public spaces into welcoming destinations where the power of free, live music brings people together and invigorates community life. The Foundation’s primary funding areas include permanent Levitt venues and the Levitt AMP [Your City] Grant Awards, an annual grants competition. During the past decade, the Foundation has awarded more than $20 million in grants to support access to free, high-caliber live music experiences while bringing new life to public spaces.

The Levitt network of permanent outdoor music venues and AMP concert sites collectively serves more than 750,000 people annually through 600+ free, family-friendly concerts in 28 towns and cities. As an example of the high-caliber talent presented across the Levitt network, the 2020 GRAMMY nominees include 17 artists who have performed on Levitt stages in recent years.

Permanent Levitt venues are located in cities as diverse as Los Angeles; Denver; Westport, Conn.; Dayton, Ohio; Bethlehem, Pa.; Sioux Falls, S.D.; Memphis; and Arlington, Texas. Each permanent Levitt venue presents 50 free concerts every year and is programmed, managed and supported by its own 501(c)(3) Friends of Levitt nonprofit organization. Due to accelerating interest from cities and engaged citizens, the permanent Levitt venue program is growing. Developing Levitt locations across the country include San Jose, Calif. and Houston, amongst other cities. Learn more at http://levitt.org

December 2019 Accolades for the Arts 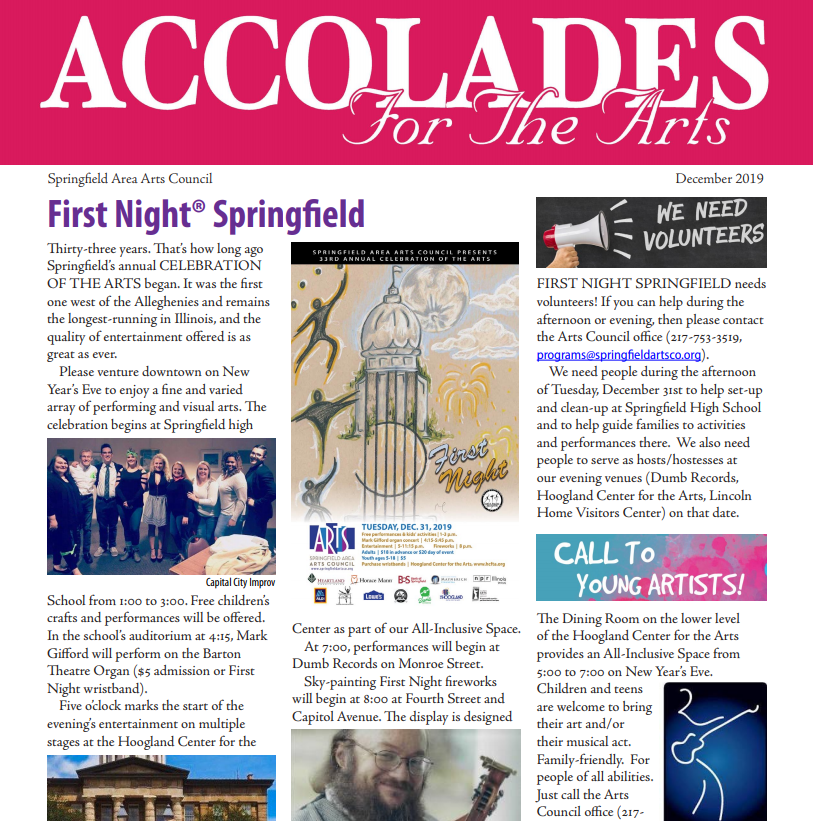 Springfield, Illinois – The City of Springfield and the Springfield Area Arts Council have announced the opening of the nomination period for the 20th Mayor’s Awards for the Arts.  These awards recognize outstanding talent in and dedication to the arts in Sangamon and Menard counties, the area served by the Springfield Area Arts Council.   The seven award categories include Individual Visual Artist; Individual Performing/Literary Artist; Arts Organization; Arts Volunteer; Arts Educator; Arts Student; and Business Committed to the Arts.

Since the first presentation in 1985, 94 awards have been presented to individuals, organizations, and businesses.  The complete listing of previous winners is attached.

The awards selection committee, appointed by the mayor, will review the nominations and select the award recipients in the designated categories.  The winners will be announced at a ceremony on Monday, January 13, 2020, at 5:30 p.m. in the LRS Theater at the Hoogland Center for the Arts.  The winners also will receive artwork created by a commissioned Sangamon or Menard county artist, a tradition of the Mayor’s Awards for the Arts program.  The public is invited to the ceremony and complimentary reception.

For additional information about the program and nomination process, please call the Arts Council office at 217.753.3519.