The National Endowment for the Arts and the Poetry Foundation partner with state arts agencies to support Poetry Out Loud, a competition that encourages high school students to learn about great poetry through analysis, memorization, and recitation.  The program helps teens master public speaking skills, build self-confidence, and learn about their literary heritage.

April 2020 marks the 15th anniversary of Poetry Out Loud. Since its inception, the program has reached more than 3.8 million high school students and 60,000 teachers from 16,000 schools in every state, the District of Columbia, Puerto Rico, and the U.S. Virgin Islands.

A video of the 2018 Illinois state contest, produced by UMedia.

For more information, please visit www.poetryoutloud.org or call 217-753-3519, or you may email Central Illinois regional coordinator Sheila Walk at programs@springfieldartsco.org. 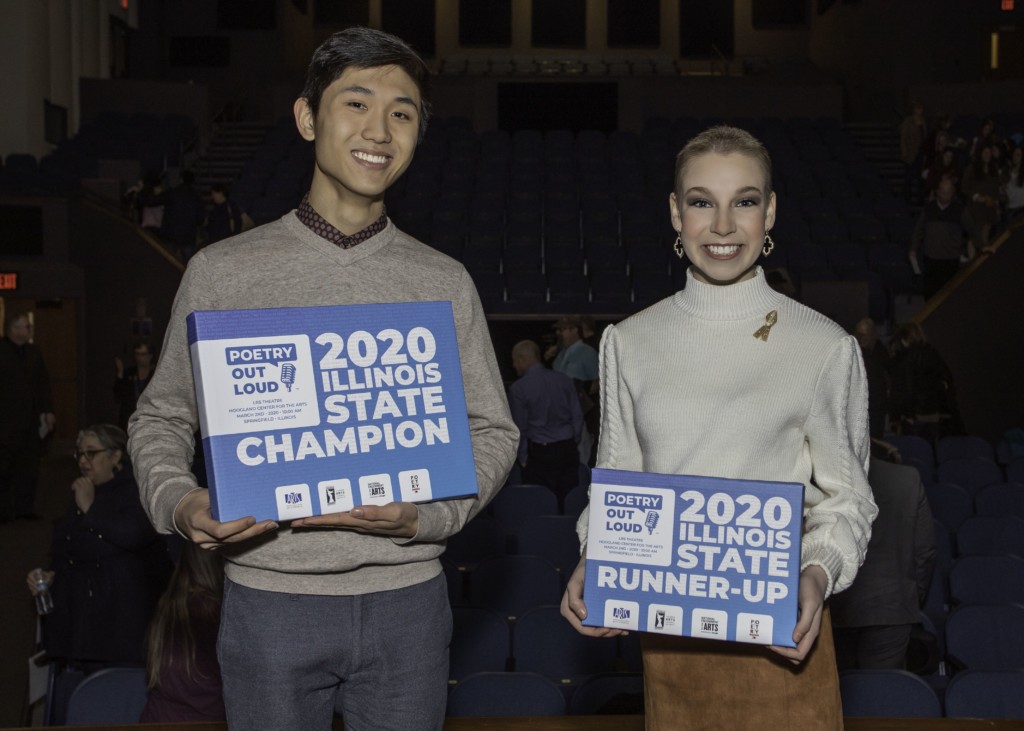 Think not of them, thou hast thy music too.”

These lines from “To Autumn” by John Keats were among those recited by Charles Hsu (Deerfield High School), the 2020 Illinois State champion in the Poetry Out Loud: National Recitation Contest.  The competition was held on Monday, March 2, 2020, at the Hoogland Center for the Arts in Springfield.

To win the competition, Hsu also recited “Learning to love America” by Shirley Geok-Lin Lim and “I Am Offering this Poem” by Jimmy Santiago Baca.  Hsu will advance to the national competition in Washington, D.C., in late April.

Other students participating from around the state:

Special guest at the contest was Susan Dickson, program director at the Illinois Arts Council Agency.

Poetry Out Loud in Illinois is a collaborative project of the Illinois Arts Council Agency and seven arts agencies, each of which hosts a regional contest.  The Poetry Out Loud:  National Recitation Contest is a national program that encourages high school students to learn about great poetry through analysis, memorization, performance, and competition.  The National Endowment for the Arts and the Poetry Foundation, in conjunction with state arts agencies, support this nation-wide program with participants from all fifty states plus Washington, D.C., the U.S. Virgin Islands, and Puerto Rico.

“Among the benefits of the Poetry Out Loud program is that it helps young women and men find something they’re good at.  These students are so brave and talented and insightful,” said Sheila Walk, contest organizer, during the post-contest reception, “and they are competitive yet supportive of one another.”

More information is available at www.poetryoutloud.org or from the Springfield Area Arts Council. 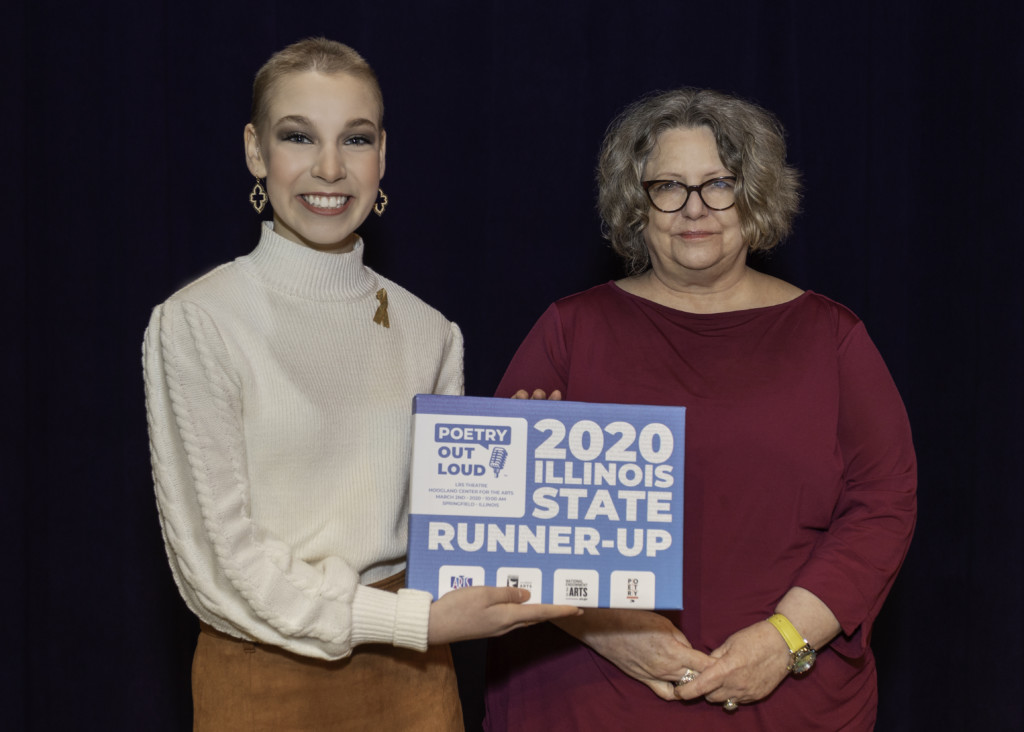 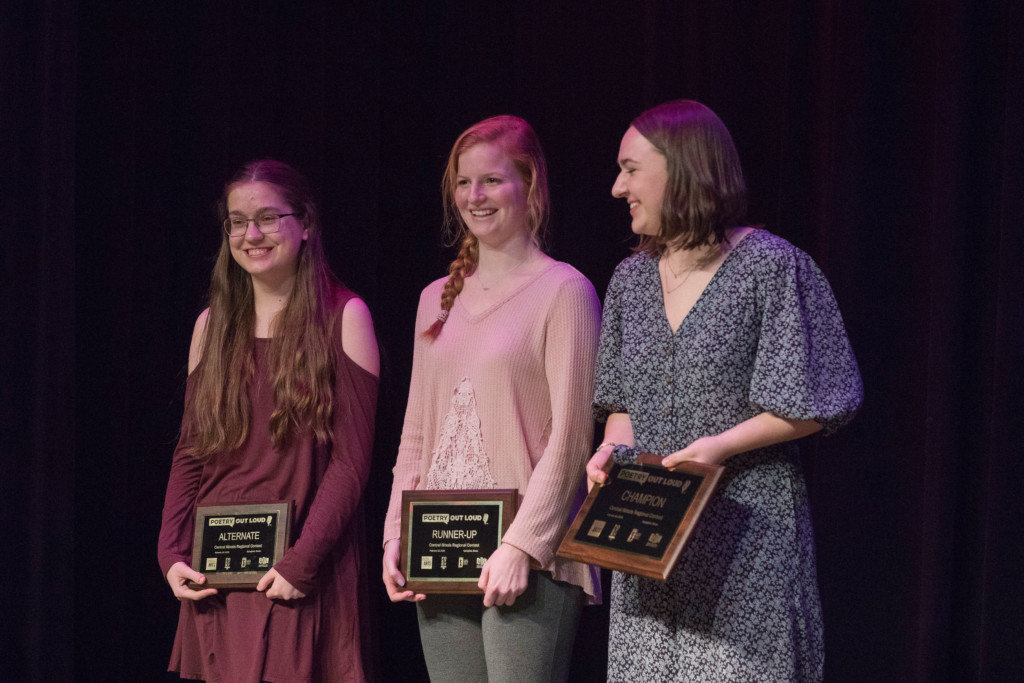 “A poet is someone who can pour light into a cup, then raise it to nourish your beautiful parched, holy mouth.”  حافظ  Hafiz

Sixteen students from around Illinois will participate in state-wide poetry recitation contest.

Award-winning teenagers from around Illinois are set to compete in Springfield for a slot in the 2020 Poetry Out Loud National Recitation Contest in Washington, D.C., in late April. This event is free and open to the public. It is set to begin at 10:00 A.M. on Monday, March 2, 2020, in the LRS Theatre of the Hoogland Center for the Arts at 420 South Sixth Street in downtown Springfield.

The Springfield Area Arts Council will host sixteen high school students who were winners and runners-up in competitions held this month in eight regions spanning Illinois. Starting in their own classrooms, these students study, memorize, and recite renowned classic and contemporary poetry at each level of competition. A panel of poets, teachers, and performers judges each recitation. The state champion will receive a trip to the nation’s capital to join a field of fifty-three students vying for the top prize, a $20,000 scholarship.

The Springfield Area Arts Council coordinates this annual contest in partnership with the Illinois Arts Council Agency. Poetry Out Loud is backed by the National Endowment for the Arts and the Poetry Foundation. Now in its fifteenth year, the contest is designed to encourage interest in poetry at the high school level. In Illinois this season, over 10,000 students and 200 teachers from more than 40 Illinois public and private high schools participated.

The NEA hosted 2019 POL National Champ Isabella Callery (Minnesota) and National Runner-up Scottlynn Ballard (Illinois) at the National Book Festival this year. They were in conversation with poet and national finals judge Jericho Brown, and they both recited gracefully and spoke eloquently about POL and their connection to poetry. You can find the footage of the session here: https://www.youtube.com/watch?v=QdEGN7NRcC0

Illinois’ own Scottlynn Ernestine Ballard won second place at the Poetry Out Loud National Competition in Washington, D.C. on May 2nd, 2019. She is a junior at Edwardsville Senior High School. 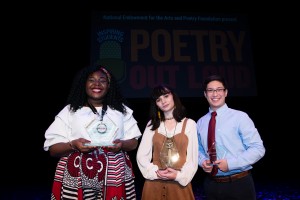 The Poetry Out Loud national finals are administered by Mid Atlantic Arts Foundation.

Poetry Out Loud is a partnership of National Endowment for the Arts, Poetry Foundation, Illinois Arts Council Agency and other state arts agencies. Since 2005, 3.8 million students from 16,000 high schools nationwide have participated in this program. 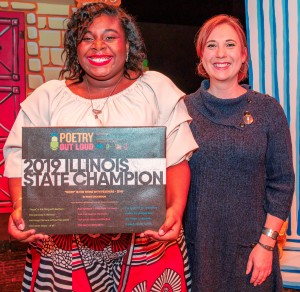 Scottlynn Ballard from Edwardsville Senior High School (Edwardsville) was declared the winner at the Illinois State Contest of the Poetry Out Loud: National Recitation Contest held on Friday, March 8, 2019, at the Hoogland Center for the Arts in Springfield.  She will advance to the national competition in Washington, D.C., in late April.  To win the competition, Scottlynn recited “Worth” by Marilyn Nelson, “Self-Help” by Michael Ryan, and “Ode” by Arthur O’Shaunessy. 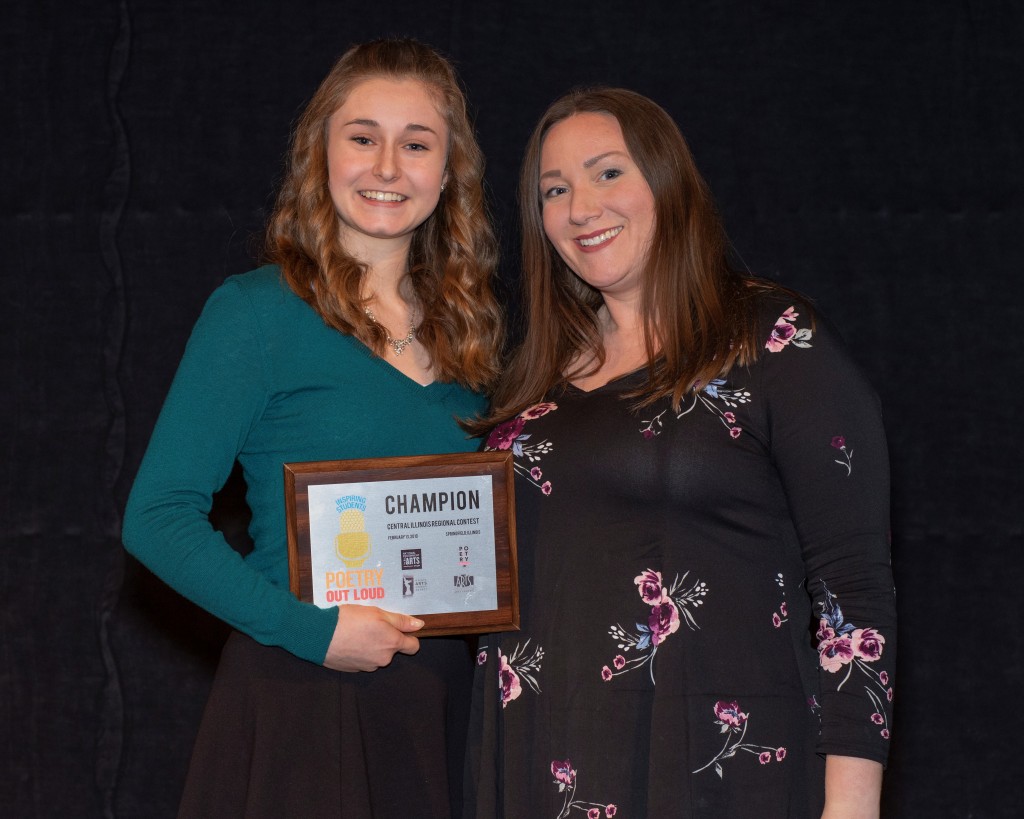 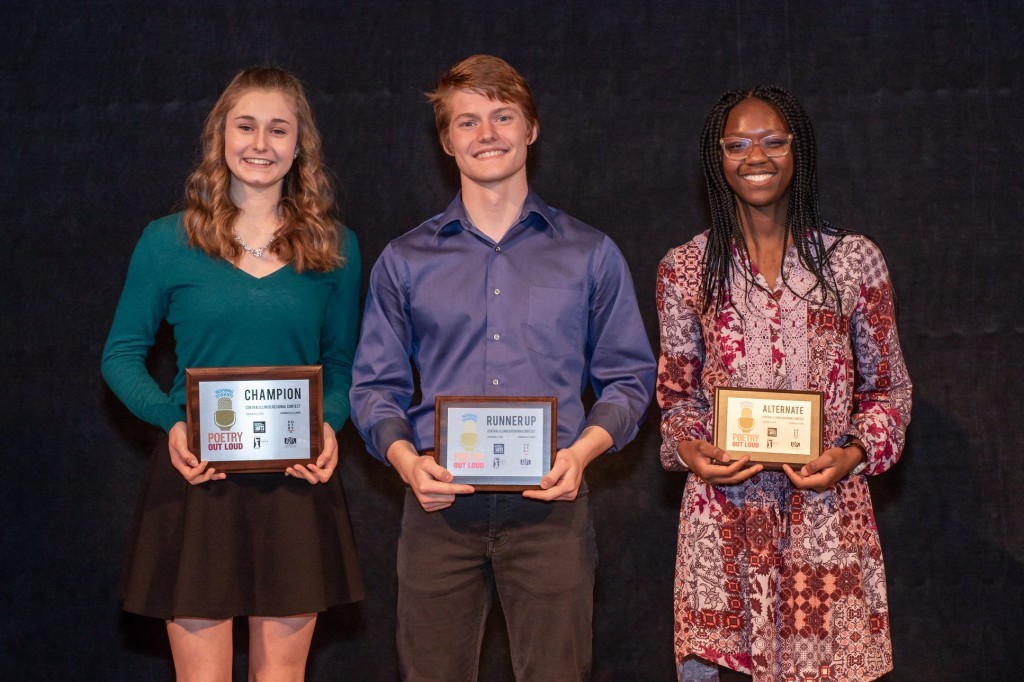 Cassandra Bradbury and Cole White of Pawnee High School were the top two finishers in the competition.  They will advance to the Illinois State Finals in Springfield at the Hoogland Center for the Arts on Friday, March 8, 2019, at 10:00 A.M.

The Illinois State Contest will feature recitations by two students from each of eight Poetry Out Loud regions in the state:  Alton, Carbondale, Champaign, Chicago-City, Chicago-Suburbs, Rockford, Rock Island, and Springfield.  The Illinois State Champion will advance to the national contest in Washington, D.C., in late April.

Over 1,395 students and 35 teachers began the 2019 Poetry Out Loud season in central Illinois last fall.  18 students competed the Central Illinois Regional contest. There name are: